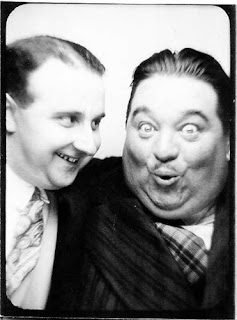 Checking out the photobooth pool on Flickr, I was amazed to find dozens of pictures of a man named Willy Michel posing repeatedly with numerous actors, dancers and comedians of French theatre and silent film.

Translated from this photo set:

For over 20 years, the photographer Willy Michel attempted to immortilize himself alongside his best Parisian clients: by tucking himself into a machine for which he was the promoter in France: the Photomaton.

Each photo is accompanied by an explanation of the actor's name and what is known of their resume (in French). Contributed by J. -C. (sic) Curtet, whose other sets of photos are entirely black and white vintage images of souvenir postcards and worldly wondrousness.

Link and Link (to a particularly good one with Félix Mayol)
Posted by Jenny Hart at 10:39 AM
Email ThisBlogThis!Share to TwitterShare to FacebookShare to Pinterest
Newer Post Older Post Home