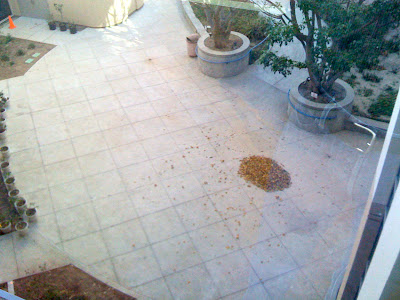 As the wind blows, an eddy is created that pulls
all the leaves to a central, swirling pile
St. John's Hospital, 2nd Floor, Oxnard, California
The climate control system in the mid-1980's Mercedes 124-series automobiles is legendary for its needless complexity. Currently, my 1987 Mercedes 300TD blower fan speed oscillates with the blinking of the turn signals. It is charming, in a way, and it is notable for its accidental complexity. I have no idea what occurred in the electrical system to create this odd happenstance but, even with a schematic at hand, it would be fairly complicated to recreate what happened by chance.

When the architects presented the foam core model of the future St. John's Hospital, I am sure their expansive descriptions presented this tastefully restrained courtyard as an oasis of solace. The courtyard would host ceremonies to commemorate volunteers who selflessly logged a 1000 hours of service. Miraculous cures would be announced by earnest doctors. New hospital wings would be presented with city council members standing near. In between those community building events, the families of the stricken would gather to regroup and remember the beauty of a rose while overworked doctors would take a break to excitedly discuss new treatment options.

Without a clear way to get out there or a place to sit, it remains a bland, lifeless concrete pit. Smokers, the stalwarts of the outdoor exodus, are discouraged with numerous No Smoking signs. But, for all the dashed hopes of the courtyard, I suspect that nobody expected the miracle of the self-organizing leaf pile! With the same accidental complexity of the Mercedes blower fan, the soulless building creates a perfect swirling eddy to form a dancing ring of leaves as they collect in a central pile!

Though I am certain this was not designed as such, has there ever been a case of landscape architecture that was engineered to harness the wind to create a self-cleaning space? Perhaps to a central composting pile?
Posted by Mister Jalopy at 7:18 PM
Email ThisBlogThis!Share to TwitterShare to FacebookShare to Pinterest
Newer Post Older Post Home