Brian Floca Takes the Kids to the Moon 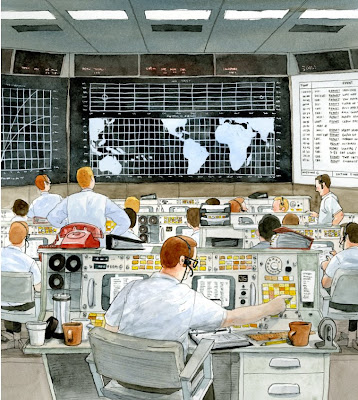 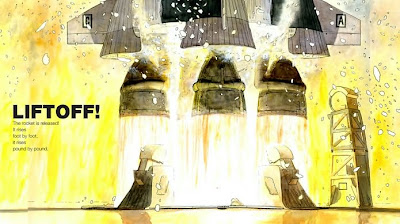 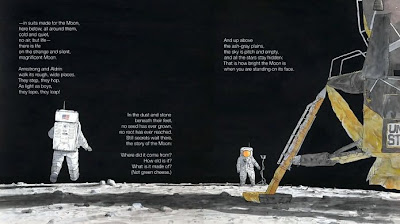 Our daughter isn't even two yet, but she's been learning how to count and mastering the intricacies of airport ground crew procedure because we've been reading Five Trucks, Brian's wonderful picture book about an airport. If you see a little girl at an airport staring out the window and squealing "Pushback tractor! Pushback tractor!" she's probably a Floca fan.

Brian has a brand-new book that's being released today. It's called Moonshot: The Flight of Apollo 11, and it's a vivid retelling of mankind's first mission to the moon. Per usual, the pictures are lovely, but there's serious geek cred in the details. Brian says: 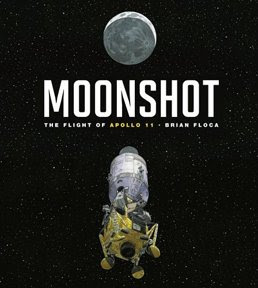 I researched Moonshot by reading books, flight plans, NASA photographs and charts; watching NASA footage, and basically absorbing everything I could get my hands on about the Apollo 11 mission. That probably sounds excessive for a book with so few words, but in a visual book an incredible amount of information — some of it obscure — can go into any given picture. There's always a tug of war between the big themes of space travel on the one hand, and the temptations of toggle switches and ignition sequence codes and elapsed mission times. I want all those details in the book, and I want to get them right, but I can't overwhelm the story.

There was a large service structure that was part of launch preparation for the Saturn V rockets, called the Mobile Service Structure. It was positioned right up against the rocket during much of the launch preparation and then, of course, it was moved out of the way. But moved to where? A Douglas Aircraft Saturn V Payload Planners Guide finally revealed where the thing was parked at liftoff; if you look for it on the page in Moonshot that shows the long view of the rocket lifting off, you can find it, though there’s not a word about it in the book.

Moonshot: The Flight of Apollo 11 by Brian Floca (Amazon link)
Posted by Todd Lappin/Telstar Logistics at 8:42 AM
Email ThisBlogThis!Share to TwitterShare to FacebookShare to Pinterest
Newer Post Older Post Home